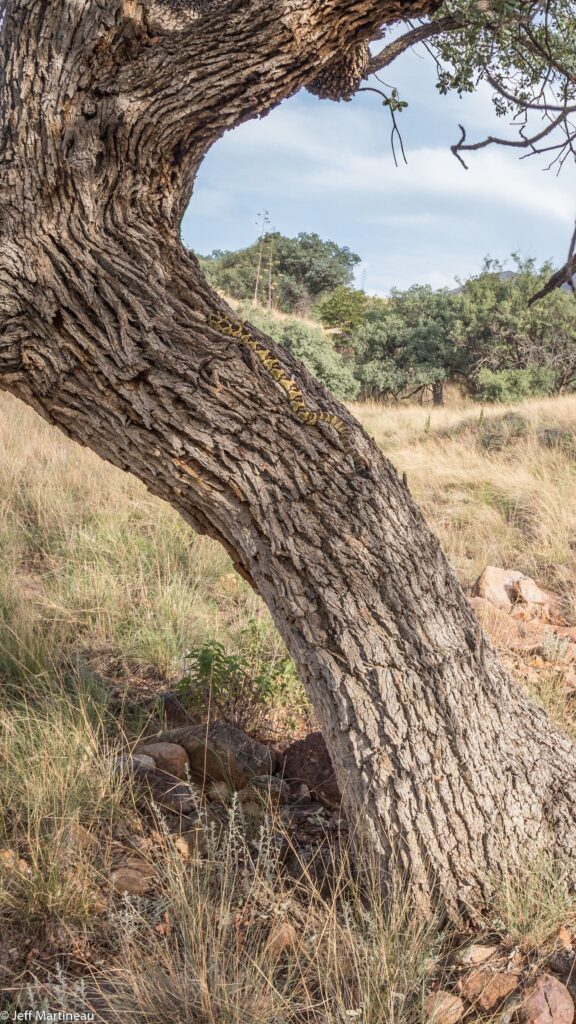 An article has been going around showing a Western Diamondback Rattlesnake sitting high in a tree, prompting many emails and messages asking about its validity.

This is normal behavior: rattlesnakes can and do climb trees, though it is not commonly observed. There is no reason to think that the series of photos was faked, staged, shopped, or anything but a totally natural observation.

An example: here’s a Western Diamondback Rattlesnake I saw just last night. It was disturbed by my flashlight and fled into the bushes … where it suddenly started to climb. It went higher and higher, and was still up there when I passed through the area again hours later. This snake decided the best escape route was: up.

Here’s a Blacktailed Rattlesnake seen on a job site by Jeff Martineau, one of our field team, as it ascended a tree. Blacktails are known to climb like this, possibly to hunt birds and squirrels.

Here’s another Blacktail, which I saw from the edge of a road high in a tree, clearly not photoshopped 😉

Why do rattlesnakes climb trees?

There are probably a variety of reasons why a rattlesnake would climb a tree, but in most cases, I would assume that it’s to access prey. If you’re able to get off the ground, a lot of potential prey items, like birds and squirrels. They may also climb to escape predators, to stay cool, or to escape potential flood water during the monsoon season.

Are rattlesnakes going to drop out of the trees?

Almost certainly not. I suppose a snake could happen to make a mistake and fall out, and if you’re walking by right at that second you could possibly have a rattlesnake falling out of a tree onto you. But that’s an extremely remote, chance circumstance that isn’t worth worrying about.

You may have heard friends from the east claim that water moccasins routinely jump from trees into the canoe, too … but we’ll just gently say that they are completely full of it. Sure, it’s possible that someone scared a snake at the right time but and there are likely a handful of “lightning strike” type scenarios where this has possibly happened, but it’s not what they “do”. It’s like saying that the handful of dogs each year who accidentally disengage a parking brake and end up rolling the car down the street qualify the statement of “dogs drive cars”. Just think it through.

Does this mean they can climb the wall and get into my yard?

Not at all. Rattlesnakes can climb if there are sufficient rough surfaces to grip, which excludes your block wall or rattlesnake fence (if it’s installed properly) While they clearly can and do climb, they’re not nearly as good at it as a snake like a Gophersnake, Kingsnake, or Coachwhip, which are built for the task. If you’ve got a secured yard without “footholds” for lack of a better term, you should not expect rattlesnakes in the yard.

To close: a note to those on social media who like to shout answers on topics they don’t know much about: stop it 🙂 A simple google search in advance would have shown you how often rattlesnakes are actually found in trees, and that it’s totally normal. Here are some other videos of this behavior that I’ve found out there: