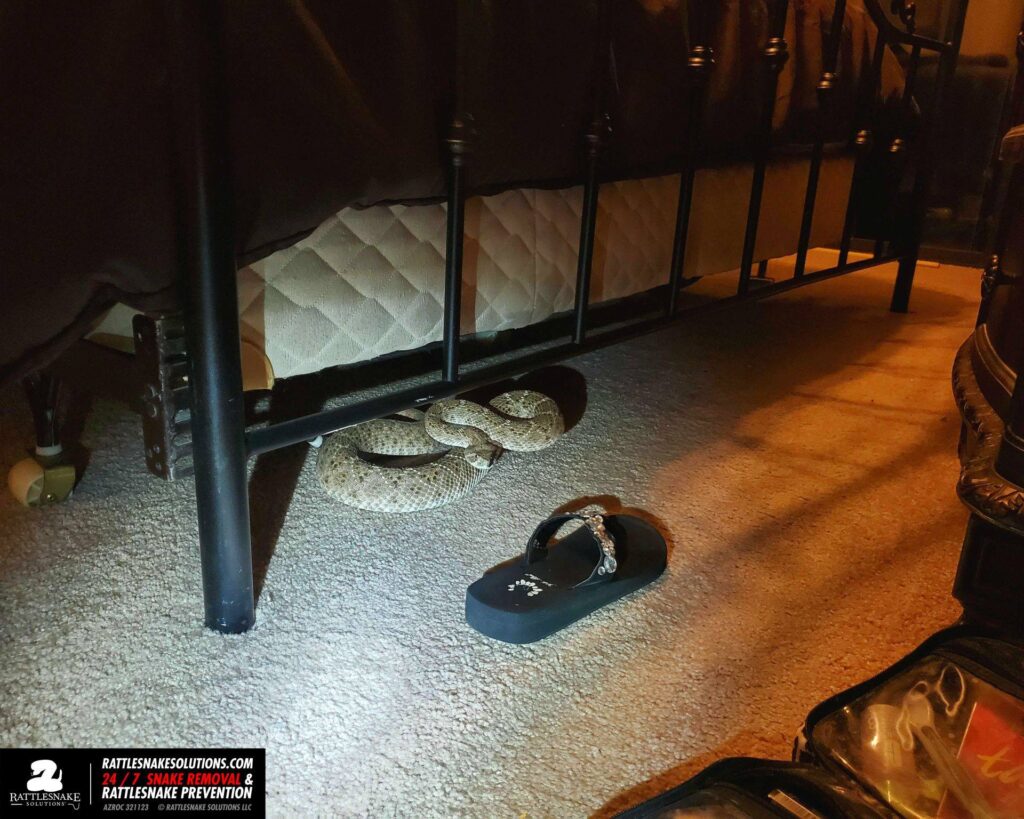 A rattlesnake in the backyard is one thing … but how about in the house, in the bedroom, and even under the bed? It happens, though, thankfully very rarely.

The thing is: rattlesnakes don’t want to be in your home. There are species of snakes that get in often, daily even, like Nightsakes and baby Longnosed snakes. Rattlesnakes, on the otherhand, for one reason or another just don’t make an effort to come inside. If I were to assume, based on how rattlesnakes handle stress and modify their behavior accordingly, the activity inside a home makes them less than ideal hiding spots.

How often does a rattlesnake get inside?

Fortunately, Rattlesnake Solutions has a very large collection of human-conflict data of this sort from over ten thousand individual encounters. It happens, but not very often.

Of all encounters we’ve documented, fewer than 100 were rattlesnakes inside the home. If you remove homes that were previously abandoned, missing entire walls, or in a condition where they should be condemned … you end up with fewer than 40. That puts the chances of a rattlesnake encounter in your home, based on snake removal records, at 0.4%. That puts it into a solid “don’t worry about it and go on with your day” category.

Most of the time, a call to catch a rattlesnake inside a home ends up with a Desert Nightsnake in our bucket. These little guys look quite a bit like a rattlesnake and are often mistaken for them.

How does a rattlesnake get into the house?

Fortunately, rattlesnakes are easy to keep out of the house. They come in the same way we do – right through the front door. Most of the time, a rattlesnake inside a house, and in fact a good portion of the other types of snakes as well, come in through a door left open.

Who leaves the door open in Arizona? Everyone, it seems, on the right cool day. Especially our midwestern friends, where it seems an open backdoor on a breezy spring day is a normal thing, tend to leave that sliding door open a bit during prime rattlesnake activity time.

They also can get in through any other opening. Famously, the wife of a former Maricopa County Sheriff was bitten by a rattlesnake in her office. The reason? Workers had opened gaps into the home, which allowed the snake easy access.

On other relocation calls where we’ve captured rattlesnakes inside the home, the situation is often similar. A home with a wall partially removed during construction, a partially-completed vent removal allowing access, large gaps under garage doors or patio doors, etc. Simply, if there is access to inside the home, animals may find their way in.

What’s going on with this photo of the rattlesnake under a bed?

This photo was from an apartment complex in the North Phoenix, Cave Creek area. Mitch ran out to capture it. Upon arriving, he assumed it would be another nightsnake (which it often is) and had to run back out to the car to get his tongs and bucket after seeing this.

He was able to quickly and safely capture it. But how and why was it in there? And does the resident need to worry about more of them?

As we described earlier, it turns out that the resident left the home for less than 5 minutes, leaving the door slightly ajar. That’s all the time it takes for a wandering rattlesnake to find the cool, air conditioned “cave”, and slip inside.

This also does not mean there are others. Rattlesnakes, while being quite social in a variety of situations, are most often found at homes alone. They do not, as a popular myth goes, travel in pairs.

This also does not indicate that there are more rattlesnake encounters in the Cave Creek area … that is just true, regardless of this particular encounter.

How to keep rattlesnakes out of the house?

The best way to keep rattlesnakes out of your home is to keep doors closed and eliminate access, down to a 1/4″ space.

Sometimes that can be tricky, however. Something we have seen with homes in the valley is an issue with how cabinets are put together. This seems to be the reason behind a majority of nightsnake visits, and at least a few rattlesnakes.

If you look under the sink in your kitchen or bathroom, you’ll most likely see the pipes disappearing into the wall in an orderly, well-sealed way. Behind the cabinets, though, is a different story. The pipes coming into the home may be unsealed. That means if there are any gaps under the cabinet overhang (there most often are), there’s a direct highway from under the home to your bedroom bathroom. This may also be the cause for your scorpion and rodent issues.

The easy fix? Seal the gaps under the cabinet overhang. You could go through the trouble to pull out the whole cabinet, but without knowing for sure there’s a problem to begin with, that’s probably overkill. A Saturday afternoon with some expanding foam is all you likely need.

The other thing you should do is to take steps to reduce the overall number of rattlesnakes visiting your property. That is best done by a combination of property modification (landscaping, etc., here’s our step-by-step guide) and physical barriers, like properly sealed garage doors and rattlesnake fence installation.

So rest easy. While a rattlesnake inside the home is something that does happen from time to time, it’s nothing to be overly concerned with. No need to call the realtor or burn the house down; just keep the door closed and you’ll be just fine.