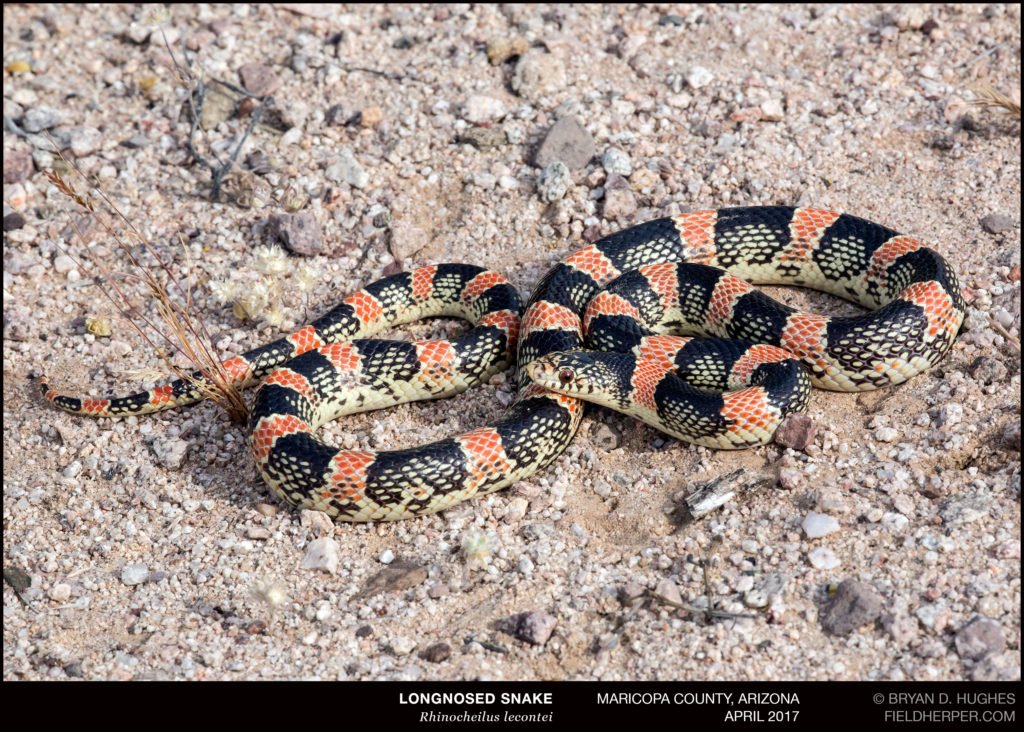 For as common as they are, and as often as people see them, the Longnosed Snake (Rhinocheilus lecontei) is almost unknown to most of us.

Why is this? It seems to be due to a superficial similarity to a very well-known snake, the California Kingsnake (Lampropeltis californiae). A mild-mannered, white-and-black banded snake that appears from time to time in backyards throughout Arizona, Kingsnakes are famous for their preference of rattlesnakes as a food source. They look quite a bit like the lesser-known Longnosed Snakes, but have a few key differences.

First, it should be said that Longnosed Snakes are completely harmless. They’re eaters of lizards, reptile eggs, and small rodents. I’ve never had one attempt to bite me over hundreds individuals handled. They do have a tendency to poop on the hands of the holder, however, and even bleed from their cloaca as a further action to say “hey, don’t eat me, I’m gross.” It must work, because I’ve never eaten a Longnosed Snake!

Longnosed Snakes live on the ground, and are mostly nocturnal, though they can be seen moving at any time of day in certain conditions. I most often encounter them as they move from hole to hole in the desert soil, poking their namesake nose in to see if there’s anything good to eat inside. They can get large, up to about 3′ in length, though most adults are a little more than 2′ long. They’re one of the few snakes that has become well-adapted to highly developed areas and can be found far from natural desert areas. Specifically, the Paradise Valley area, with its lush and green backyards that also tend to be huge, are home to a large number of Longnosed Snakes.

While some Longnosed Snakes are just black and white, most have some red, pink, or orange coloration as well. The pattern is most often more of a loose, jumbled or “pixelated” appearance, some having full red bands along with the black and white. Others just have a bit of a pinkish wash over the back, but it’s quite visible. Kingsnakes never have this coloration, so even a little pink or orange is enough to tell one from the other.

As the name implies, Longnoses Snakes have, wait for it … a long nose. It’s longer and more pointed than the round snout of a Kingsnake. It can be difficult to tell without seeing a lot of both without a direct comparison, but it’s clear when they are side-by-side.

Longnosed Snakes also often have grey or white smudges within each black band. Kingsnakes, while their pattern is very often far from perfectly-formed, don’t mix it up like this.

How to quickly differentiate a Longnosed Snake from a Kingsnake:

Why does it matter to know the difference?

I’ve always found this mentality odd, but it’s a question that’s posed enough (usually angrily, for some reason) that it should be addressed. If you are one of the many people who come to anger over facts that you don’t personally value, you are correct: knowing the difference between a Longnosed Snake and a Kingsnake is not likely something you’ll ever need to know. However, if you’re scared of snakes (most likely the reason for the above-mentioned attitude), knowing more about them is how you fix that.

Both Longnosed Snakes and Kingsnakes are completely harmless and not an issue at all to find in your yard or home, but for the snake-phobic, knowing what you’re looking at at 2 a.m. in your kitchen may be the difference between going back to sleep or not.

Longnosed Snakes tend to be found within homes more often than Kingsnakes. It could be because they seem to be more commonly encountered in general. It could also be because they tend to lay their eggs in areas around homes where they get inside more often. Flowerbeds, lantana bushes, and eroded material between pavement and the foundation are common spots for this to occur.

When baby Longnosed Snakes hatch, generally in the first few weeks of August, they seem to appear everywhere. Any social media or community group will have daily photos of baby Longnosed Snakes, asking “what is this?”, and a stream of incorrect identifications of a Kingsnake. While Kingsnakes do get into homes from time to time as well, they are not nearly as adept at doing so as the smaller, less-famous Longnosed Snake.

Aren’t sure? Send us a photo!

Many people are surprised to learn that Longnosed Snakes exist at all, let alone are the true identity of decades of “Kingsnake” encounters. If you have a snake photo that you’re not quite sure of, email it to us and we’ll tell you what it is.