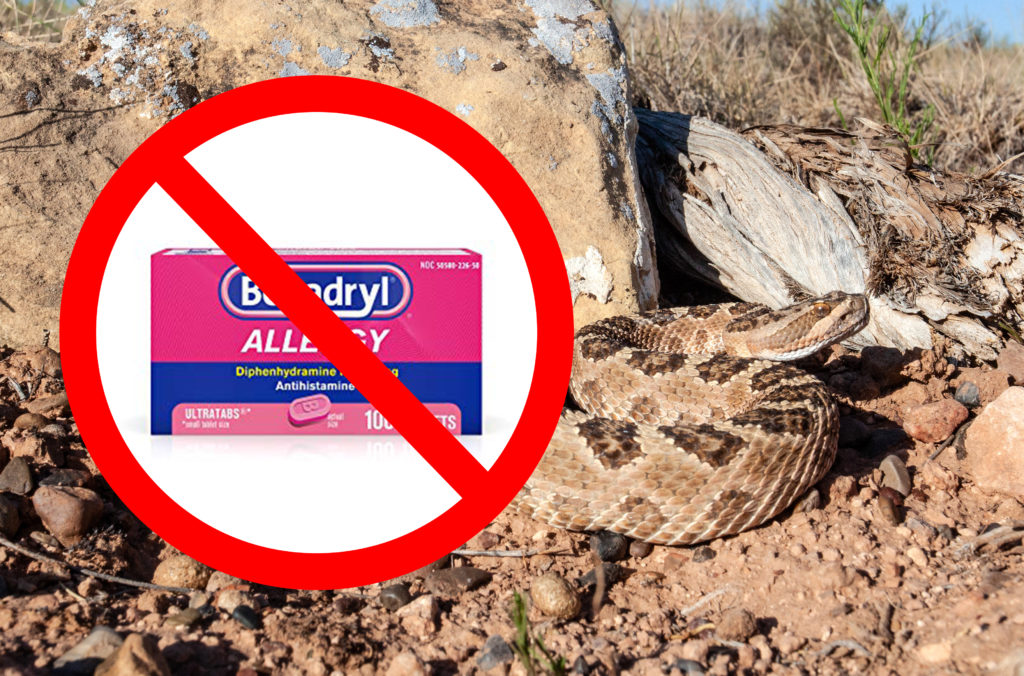 The latest bit of rattlesnake misinformation is spreading fast, showing up all over the place these last week or so. It claims people living in “rattlesnake country” (i.e., almost anywhere in the U.S.) should keep plenty of Benadryl on-hand, being a miracle cure that works must faster than tried-and-true antivenom.

Before getting into specifics – if you read no further: the quotation below is all highly inaccurate; do not spread false medical advice. If you have shared this post, delete it. There are no folksy home remedies for a rattlesnake bite. There are no essential oils or homeopathic water pills that will work. Venom does not care about how you feel about science, Western medicine, and the healthcare system as it destroys your body.

Here’s the latest iteration, shared today many hundreds of times across Facebook:

“Important info about keeping Benadryl with you –
For all of us in Rattlesnake country: I have learned something new that I thought was important enough that I wanted to pass on. Our hired man was bitten by a rattlesnake a few days ago. He was getting ready to bale and turned over a windrow to check the moisture and the snake was in it. It wrapped around his arm and bit him on the underside of the wrist. Luckily it was not a severe bite, the fang marks were clear, but not deep enough to draw blood. He came straight to the house and we got ice on it and had him to the hospital within an hour. I called ahead so the emergency room was ready for him. By the time he got there his arm was starting to swell to the shoulder and his throat was getting tight. The first thing the emergency room did was give him Benadryl. Apparently antivenom must be received within 4 hours of the snakebite, but the immediate threat is swelling and death of tissue, which was treated with the Benadryl. The swelling in his arm and throat started going down right away. The anti-venom medicine had to be prepared and was not ready for a couple of hours. He ended up getting two doses of antivenom and spent the night in the hospital, where they drew blood every three hours, but came home healthy the next day and went back to work.
I have always carried liquid Benadryl in all of the pickups because I am allergic to bee stings. After this happened I went out to check my supplies. All three of the bottles I had been carrying behind the seats in my emergency kits had been in there quite a while and had cracked and the liquid was gone. So that wasn’t going to be any help at all if we did need it.
My daughter, who is a nurse, told me to go buy the children’s chewable Benadryl instead. It is given according to body weight, so can be used for adults also, just give a larger dose. She said if you chew it and hold it in your mouth it will absorb just as fast or faster through the membranes of the mouth than from the stomach. The box doesn’t take much room and can be thrown into the glove compartment or saddle bags or a back pack if hiking, etc. Makes sense to me, and it might save a life.“

This is not good information. Starting with the tale of the rattlesnake that wraps itself around the person’s arm before biting, and getting worse from there. The rest, seems like a third-party interpretation of a possibly real story that has been distorted and misunderstood until twisted into this last form.

Benadryl is used in the protocol of some paramedics and hospitals as a response to anaphylaxis. This does not mean, however, that it should be expected to delay the effect of the venom, as is suggested in the post.

The post author’s daughter might indeed be a nurse, but let’s try some more qualified individuals. The best breakdown is a Facebook comment from Dr. Nick Brandehoff, Emergency Medicine/Medical Toxicologist at UCSF Fresno, which details just how little Benadryl helps as an emergency snake bite treatment. This statement has also been backed by the Florida Snakebite Institute as well as doctors and staff of the National Snakebite Support Facebook Group.

Hi Everyone, I wanted to address the poor information about the use of Benadryl (diphenhydramine) making the rounds on several snakebite forums. Benadryl is ineffective for treating a venomous snakebite, even as a temporizing measure in the back country for the following reasons.
1) Pit viper envenomations in the US cause local tissue injury from direct venom effect. The cell death causes swelling and pain from the release of intracellular contents as the cell dies. Furthermore, venom causes blood vessels to become “leaky” resulting in further swelling, redness, and pain as fluid leaves our blood vessels and enter the tissues. Benadryl does nothing to negate these effects.
2) Systemic symptoms of envenomation are rare but may include nausea, vomiting, low blood pressure, swelling of the throat, bleeding, etc. These are also venom induced and are not reversed with Benadryl either.
3) Allergic reactions can happen from a snakebite but are very rare and if there are systemic signs as discussed above, the acute treatment is epinephrine, not Benadryl (or steroids, etc). Benadryl and other drugs can be used in conjunction with epinephrine at the hospital to keep the allergic reaction from rebounding.
4) Comparing bee venom and snake venom to assume Benadryl will work is not congruent. Bee venom specially targets cells causing release of histamine which results in swelling, pain, redness, and allergic reactions. This is similar to the pathway for non-venom induced allergic reactions. Benadryl is a “antihistamine”, so the mechanism to stop the reaction makes Benadryl a good drug for this scenario. This is not the case for snake venoms.
In short, Benadryl is not effective for snake envenomations in humans or other animals. Please stop sharing this information.

“Benadryl offers no benefit in the management of snakes unless the victim is experiencing an allergic response, however the first line medication for treatment is epinephrine. Additionally Benadryl can cause an alteration in the victims mentation masking other neurological signs and symptoms.”

Diphenhydramine (Benadryl) is an antihistamine. Histamine does not play a role in snake envenomation. Therefore, diphenhydramine has no role in its management.

The RARE exception to this would be if the patient were to have an allergic reaction, either to the venom or the anti-venom. Diphenhydramine would be SOMEWHAT helpful in that situation, but it’s certainly not the most important medication.

But because those allergic reactions are very rare, I will reiterate that, in general, Benadryl has essentially no role in the management of snakebites.

Dispelling the Benadryl myth – misinformation can be deadly

When someone is bitten by a rattlesnake, there is nothing that can stop the venom from circulating in the tissue – not a tourniquet or a suction kit.

How each individual reacts to the venom is going to vary, and the only known means to neutralizing the venom is through the use of antivenom. Antivenom needs to be administered quickly, in the care of a physician, and in a professional setting such as a hospital. There are no home remedies.

Rarely, some people may experience an allergic reaction to the venom, much like how some people react to bee stings. When this reaction becomes systemic, meaning it moves from just one organ system (such as swelling in the tissue near the bite) to at least one other organ system such as the respiratory system, it is considered to be an anaphylactic reaction, also known as anaphylaxis.

Patients experiencing anaphylactic shock immediately require epinephrine – the same medication found in an EpiPen, and emergency services should be called without delay. Benadryl, also known as Diphenhydramine, is a useful medication in continuing to manage allergic reactions. Benadryl cannot reverse anaphylaxis as it works too slowly over the course of hours rather than seconds. It can, however, help manage allergy symptoms.

To recap:
• Of those envenomated, only a few will experience an allergic reaction called anaphylaxis.

• Anaphylactic shock is a medical emergency that urgently requires epinephrine.
• Benadryl is used in managing symptoms of allergic reactions – it does not treat snakebite.

• The only treatment for snakebite is antivenom, which can only be found and administered in hospital under the care of a physician or veterinarian.

The space where snakes, specifically rattlesnakes, occupy in the minds of our culture makes it very easy for misinformation to spread. Fear of snakes and stories that challenge reality are a badge of honor in many communities. The bar for research and fact-checking is very low. This is a known issue and usually just an annoyance, but this is different and can get someone hurt. The average person who has rattlesnakes on the mind from time to time has very little chance of having access to an accurate set of information. If you’ve shared this post, don’t be part of a chain of misinformation. Delete the post. It happens – these are difficult times to know what’s real and what isn’t.

For further reading to answer questions about what does work, and provide context for any of the above refuting statements: here are publications detailing actual, modern treatment of venomous snake bites.