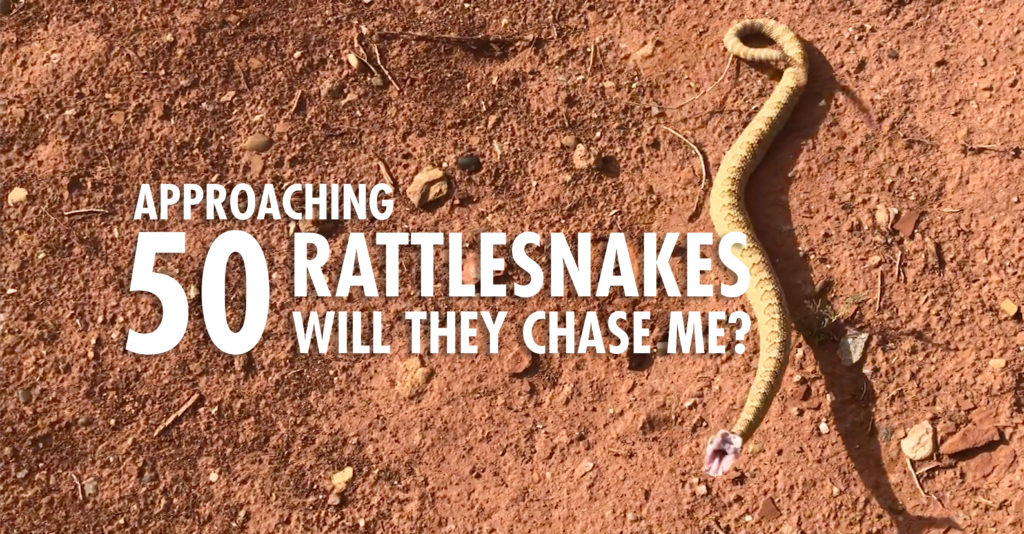 Do rattlesnakes chase people? Which is the most “aggressive”? Did a rattlesnake really attack my uncle?

These questions and comments, often the cause of online arguments, are a perfect example of just how far off the mark common perception is from rattlesnake reality. Why are herpetologists and professionals never chased by rattlesnakes, but others claim to be chased at every encounter? Why is there an apparent correlation between how much a person experiences wild rattlesnakes, and apparently calm demeanor.

There are a lot of reasons why someone may believe a rattlesnake chased them – misunderstanding behavior or context, fear response and perception, and many others. As I have found rattlesnakes and observed the variety of ways they attempt to evade the predator (me), there are certainly behavior that I could reasonably assume to be aggression if I didn’t know better, didn’t understand the intent, and certainly so if some adrenal fear response were added to the mix. Our perception and memories can be molded by our expectation and personal bias, as a lifetime of misinformation and context float to the surface the instant the rattle sounds off.

There are of course other reasons why rattlesnake chases are common stories, and they have nothing to do with snakes. Rattlesnakes hold a special place in our culture as a symbol of the West, and rattlesnake experiences (and how they are handled) can be easy tools to tell other people about ourselves. Rattlesnake encounters are a way of telling about our adventurous nature, our courage, or and other traits that have to do with our perceived identity than rattlesnake behavior. They’re also something people often love to hate, and are proud to fear.

Why do we, as a culture, hate rattlesnakes so much?

Yuck. Ick. Yikes. Scary. Huge! Kill it. Run. Shovel. It chased me to my house. It attacked my bike tire. It stalked me for hours. I had a showdown in a canyon and was trapped. On, and on, and on. These may be the real perception of many people, but what is really happening?

I’m not a psychologist, but I do work with rattlesnakes, so let’s just leave the human behavior aspect behind and see what happens with real rattlesnakes in wild situations. I recorded the approach, and sometimes contact, with 50 wild rattlesnakes to see if any of them will aggressively chase me. Watch to see what happened.

There may be a snake that is confused by what a human is and attempts to hide under the nearest cover, which may be us or our car.

There may be a snake confused by a flashlight and attempts to flee into it instead of away, unaware of where the “predator” is.

There may be a snake that is being interacted with and disturbed by someone actively looking for snakes that advances takes active and advancing defensive movement. Of course, if you’re messing with a rattlesnake and it continues to defend itself beyond your expectation or what you would prefer, that’s not aggression. If I’m asleep in my bed and a guy shows up and pokes me with a stick, my escort of that person out the front door is not an attack or a chase. For those of us that are herpers, don’t forget the context of the conversation here. Do rattlesnakes attack people hiking past them, or see someone and chase them into the house? Of course not.

If you disagree, just post a video of a rattlesnake chasing 🙂