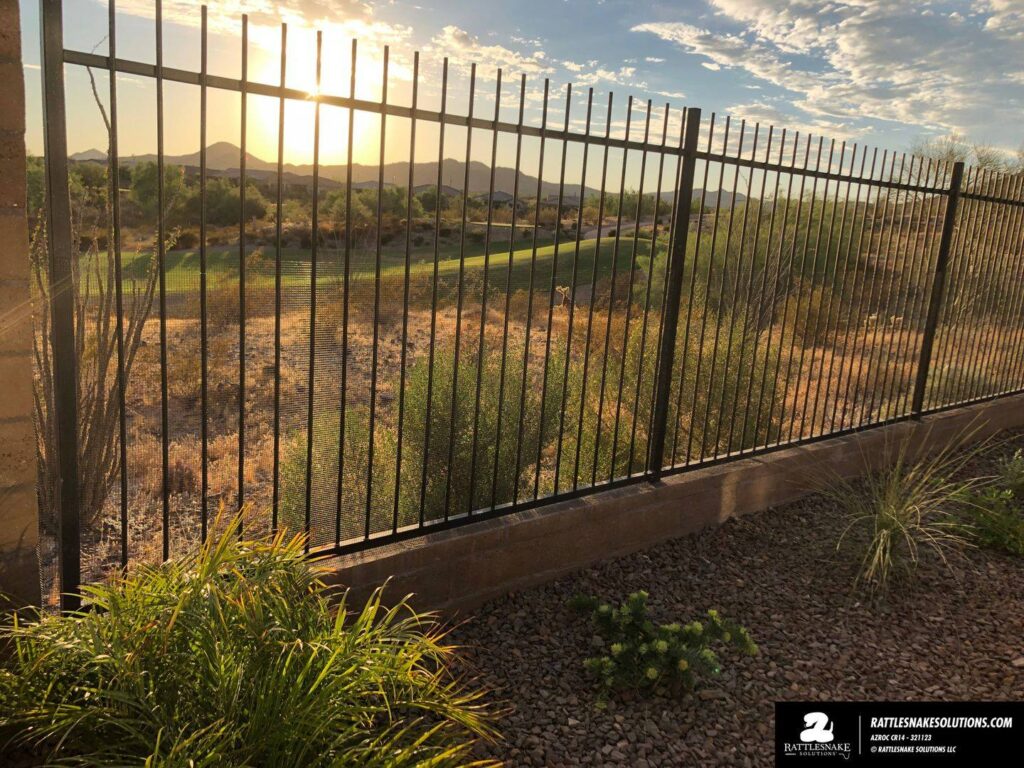 Getting rattlesnake prevention done in the winter means it will be cheaper, better, completed faster and more smoothly, with the best customer service possible.

Cooler temperatures are here and rattlesnake activity is slow. Plans for your backyard that may have included preventative actions to keep rattlesnakes out of your yard are giving way for other stuff – holiday decorations or new patio furniture to enjoy Arizona’s perfect cooler season.

But don’t get too distracted – there are several reasons why the cooler months are actually the best time to take care of rattlesnake prevention. If keeping rattlesnakes out of your life is on your long term to-do list, you’ll want to read this to the end.

1. Pricing is as good as it gets – take advantage of winter discounts!

Like any business working with seasonal demand, the need for snake fence installation ebbs and flows alongside rattlesnake activity. If you know right now that keeping rattlesnakes away from your back patio is something you want to do, take advantage of this fact.

Snake fence installation companies almost always offer off-season discounts to help keep the schedule filled, and employees happy. If you wait, as most people do, until rattlesnake activity is at its peak in April – you can expect to pay full price and have less haggle room on the details. It’s classic supply and demand, and when you come in hot looking for snake fencing in December, it’s a buyer’s market.

2. Almost no waiting – Winter has the shortest wait times to have snake fencing installed, and faster completion.

Just like pricing, the winter buyer’s market means that you’ll almost certainly be waiting a lot less time to have your snake fence installed. During peak season (April or so), snake fence providers are absolutely flooded with calls. That means that they’re usually booked out to capacity, sometimes weeks in advance.

Odds are that you’re like most people, and are looking for snake prevention services because of something that happened – a scare with a rattlesnake in the yard, or an incident with a pet – and you need it done right now just to feel at ease in your own yard.

Unfortunately, if you’re waiting for such an event before taking action, you’re in the same boat with everyone else, and may have to wait in line. You can beat the rush by taking advantage of the natural winter slowdown. In most cases, if you shop for snake fence installation in the dead of winter, you can have it installed as early as the next day.

Even better – without the brutal conditions of an Arizona summer, the installers can work longer hours. That means your snake fence will not only be completed sooner during the winter months, but the actual installation time itself will be shorter.

3. Being proactive about something as important as rattlesnake prevention can make a huge difference for the safety of your family and pets

Most people tend to wait until there’s an incident before finally biting the bullet and taking action. That incident is often just seeing a rattlesnake, but more unfortunate situations are also common.

As rattlesnake fence installers ourselves, we have a front-row seat to some very scary and sad encounters that have prompted action. Too often, we are called because a dog has been bitten by a rattlesnake, or in some cases, a family member.

Just like any other type of preventative action, rattlesnake fencing installed proactively can prevent the incident that would otherwise invoke action. If snake fencing is something you know you want to do at some point, don’t wait until an accident happens to get it done.

If you live where rattlesnakes do, proper and professionally installed snake fencing is your best insurance policy, and you can save yourself a lot of stress by getting it done early. While everyone else is panicking on Facebook over a snake seen in the neighborhood, you’ll rest easy knowing you’ve already taken care of it.

If you saw a rattlesnake at your place this year, you have the best opportunity to stop a repeat of that encounter right now.

4. There is a much lower chance of a snake being trapped in the yard

During the cooler months, from late October through late March, rattlesnake activity away from the den is at its lowest levels. More or less, rattlesnakes aren’t traveling very much.

Even then, the occasional rattlesnake den does happen! With milder temperatures and, frankly, more time on our hands, the installers should be able to do a much more thorough search of the property than they may otherwise be able to. Since you’ll want to work with a company that cross-trains snake fence installers in advanced snake detection and removal methods, they’ll be able to make sure your yard is truly snake-free.

5. The best customer service of the year is in the cooler months

This one is just about time! You should see our rattlesnake prevention team in April – driving from house to house as fast as they safely can and making phone calls in between, trying to keep up with the flood. It’s an exciting time and we all love it, but sometimes we just don’t get to spend as much time as we’d really want to with each property.

During the slower winter months, a rattlesnake prevention specialist simply has more time to be available. As a result, you may have a more relaxed and attentive experience. It’s certainly not that someone who calls in April is any less important, but the odds greatly increase that it could go to voicemail than be answered on the first ring.

By having your rattlesnake prevention done during the winter, you’ll be one of a handful of clients at the time and will likely get even more attention from the staff. Not only that, but you’ll probably have more time to ask a lot of questions that have less to do with snake fencing and prevention, and more to do with increasing your general knowledge on the subject. As with most things, the more you know about how rattlesnakes may be interacting with your property, the better prepared you’ll be and the better you’ll feel about living in your home.

As I mentioned earlier, when it cools down, rattlesnake activity is at its lowest point. For the most part, they are settled into cover in small groups, and sometimes alone. However, this does not mean that you can’t still get a rattlesnake in the yard. Especially if you live at the edge of the desert, it’s possible to have an encounter any day of the year.

In areas of urban conflict, we’re unfortunately not exactly on nature’s schedule for activity. Every time ground is broken on a new development, rattlesnakes there are displaced – sometimes into adjacent neighborhoods. Despite being slower, our rattlesnake relocation hotline is active and receives calls for service throughout the winter.

Most of these winter rattlesnakes are due to construction, but even smaller projects can do the same. If the neighbor a few houses down tears down the old shed, any rattlesnakes using it need to find new cover in a hurry. If the HOA decides to clear brush along the shared viewfence wall, you can expect the same. Regardless of the natural behavior of rattlesnakes, human-caused variables keep our rattlesnake relocation team active all year. There is truly no time where getting a snake fence is a frivolous effort.

The most important reason – the people you care about.

This article has some no-brainer reasons why it’s better to take care of rattlesnake prevention during the slow months. However, the biggest factor has nothing to do with cost or convenience.

The holidays and early new-year are when we most often host visitors. This is when we all get together (in a normal year, that is) to celebrate whatever needs to be celebrated, and guilt one another into eating way too much pie. It’s when we have our first backyard grill party, and invite co-workers over to watch the superbowl.

In Arizona, the cool months are the time when you’re most likely to have the people you care about in your backyard, and you will want to know they are safe. Above all else, thinking ahead and getting out in front of prime rattlesnake season will be the best thing you can do to keep yourself, your family, and your pets safe.