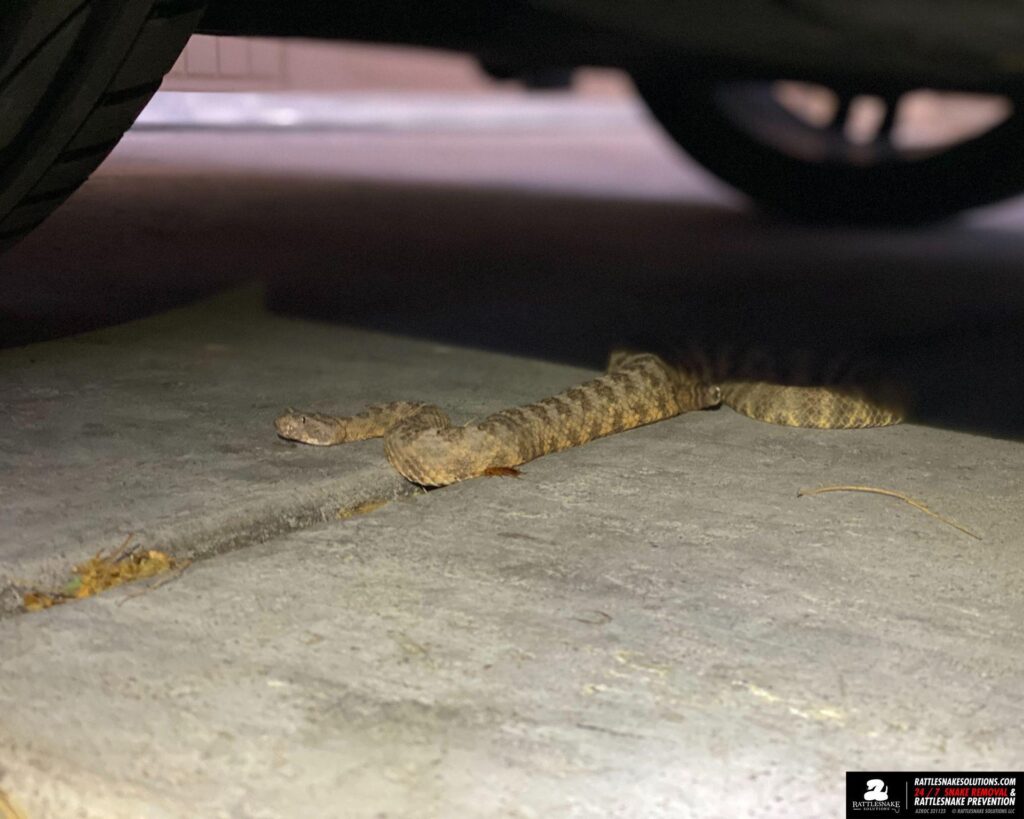 Now that evening temperatures are in the 50s for most of the major metro areas of Arizona, with cooler temperatures on the way, rattlesnake behavior shifts yet again. Throughout October into early November, rattlesnakes are on the move, eventually settling into their chosen winter den. For many homes, this den can be the garage.

In fact, during the cooler time of year, one of the only things that will make us put down our egg nogs and various pumpkin spice drinks to grab snake tongs and hit the road are rattlesnakes found in a garage. It’s nothing to be overly alarmed about, but any homeowner living in a neighborhood where rattlesnakes can be found should take note and be aware.

This is also when many of our seasonal residents (aka snowbirds) fly back to their winter Arizona homes to wait out the snow in our perfect weather. If this is you, you may want to pay special attention.

Why do rattlesnakes go into garages?

Rattlesnakes go into garages for a simple reason: to them, it’s just a cave. Not just any cave, but one that’s slightly warmer than the surrounding areas due to the proximity to a larger, heated cave (your home). This cave is also loaded with golf clubs, various boxes of holiday decorations, and dozens of boxes mentally labeled “stuff I’ll deal with later”. When there’s easy access, why wouldn’t a snake use it for a winter den?

How do I keep rattlesnakes out of my garage?

Fortunately, this is relatively easy – it just takes some attention at the right time. That time, as you might imagine, is right now.

The biggest single thing you can fix is won’t cost you a thing, because it’s a behavior change. That is: keep the garage closed as much as possible. Yes, the temperatures are perfect right now and it’s the ideal time to pull those Christmas decorations out even though it’s barely October and the HOA will throw a fit: keep it closed unless you are actively coming and going from the garage. During the early evening and just after dark, rattlesnakes are very actively moving, and if you accidentally leave the door open, even just a little, you’re all but inviting them in.

You can also check the seal on the garage door to see if it’s doing the job. What’s the easiest way to tell? Look at inside corners on either side of the garage door. If you see leaves and debris blown in from outside: congratulations, your door seal is bad. Or you can just look at it (this is the rubber bumper that comes in contact with the garage floor). If it’s frayed, rodent-chewed, or missing the edges so that it doesn’t come into perfect contact with the floor, your favorite garage door company should be called to be replace it. The best part? You’ll not only not see a rattlesnake in there this year, but fewer scorpions and other stuff, too.

Last of the big things to do: clean up the garage. I know, it’s been on the list for years, but if the possibility of a rattlesnake in the garage isn’t a motivator, what is? Rattlesnakes want to stay in a den where they can rest without disturbance, meaning that they need places to hide. A garage with no places to hide is not useable, so let’s do that. That doesn’t mean you need to clear it out, just arrange it differently. Replace old cardboard with plastic storage boxes (with lids), stored right on the ground, without space in between. Pull everything away from the wall a bit, and create space wherever possible.

Things you can do to keep rattlesnakes out of the garage:

How can I tell if a rattlesnake is already in the garage?

Here’s an easy trick we’ve learned over the years to tell if a rattlesnake is using the garage, even if it’s hidden somewhere in the back, with relative accuracy. Check the corners! Rattlesnakes don’t just crawl into the back of the garage and stay put – there is actually quite a bit of lateral movement. This staging behavior often puts rattlesnakes in the corners nearest to the garage door. Even if temporarily, this can leave distinctive tracks that can indicate whether or not a rattlesnake may be elsewhere in the garage.

In every garage, these corners have dust, leaves, and various stuff. This dust is very useful – a rattlesnake will leave a circular print in the corner, pushing larger debris to the edge. If you see this pattern, it could mean that a rattlesnake has either visited the garage recently or is still in there. If you see it between November and February, the odds of a rattlesnake visitor are higher.

How long are rattlesnakes in garages?

Though we can find rattlesnakes in garages all year, typically this period of cool weather that the rest of the world calls “winter” is when it happens. You can expect that rattlesnakes will be where they intend to spend the winter by about the second week of November. Rattlesnakes will start to explore and make small movements outside by late February, through early March. By April 1, it’s most likely that any rattlesnakes hiding in the garage over the winter have gone out to do all the stuff they do in the spring.

What about the rest of the yard? How do I keep rattlesnakes away?

That’s a larger topic, but fortunately, we’ve already written a long list of things you can do to keep rattlesnakes away in great detail. You can also take a few extra steps before family shows up for the holidays to make sure your property is as safe as possible.