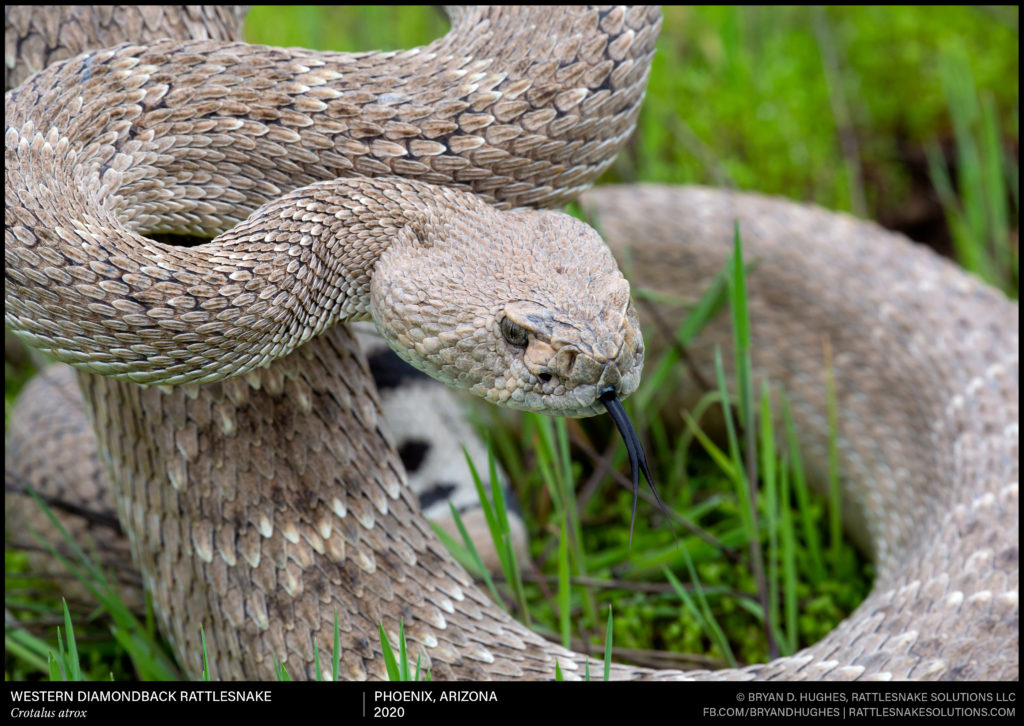 As the myth goes, rattlesnakes are hungry and grumpy, so will act more aggressively towards anyone that gets too close. What really happens is more complicated.

When conditions are right for rattlesnakes to start to emerge, usually in mid-February, they stay very close to the den for quite awhile. During this period, called egress, they may be hungry, but their activity is focused elsewhere. This is time for social activity – the complicated process of territory dominance, courtship, mating, and other inter-community interactions take place. They may eat during this time, but prime hunting season may not begin until weeks later, after they’ve left the den entirely to move to spring hunting grounds.

That means that between February and throughout March, rattlesnakes are more or less just hanging out near the entrance to their den. While they’re doing this, they are hiding under partial cover, and the males often go on scouting patrols to find females and defend against rivals. This means that encounters can still happen, and when they do, you may see more than one snake at a time. However, these situations are usually well off-trail and hidden, and the snakes will continue to do all they can to avoid confrontation with predators. Perhaps more than ever, they are easy to walk right by without ever knowing they are there.

I have no doubt at all that many people are surprised by rattlesnakes who reciprocate by enthusiastically rattling, even striking, but this is normal and would not indicate that rattlesnakes are more or less defensive during the springtime.

If this is true, why do people say that rattlesnakes are more aggressive after hibernation?

You can attribute this one to our old friend confirmation bias. If a person believes that rattlesnakes are more aggressive in the springtime, and then has an encounter where one rattles and becomes defensive, the take-away can easily be confirmation of the preconceived idea. What these people don’t see are the other rattlesnakes quietly hiding as they typically do. The experience a person can have may that all rattlesnakes rattle all the time, when this isn’t the case – they see 100% of the rattlesnakes they see.

This myth is most commonly passed around in April, which is generally after egress has ended in the low-desert, and many snakes have already eaten. That means that most people who claim to have first-hand experiences with these hyper-aggressive snakes may not have ever actually experienced a rattlesnake in a true denning situation.

How do you know this?

First, there’s no evidence to suggest that rattlesnakes are more aggressive at any particular time of year. There are stories and anecdotes from hikers and ranchers who encounter rattlesnakes from time to time (see the explanation above), but without further study and comparison, these stories are hardly evidence.

To the contrary, rattlesnake denning behavior is one of the most well-studied subjects of all reptiles. In our own team and experience, many of us spend a large amount of time each year at dens watching and observing what the snakes do. It is quite easy to move through these areas without disturbing the snakes at all. If a snake is disturbed, it may just give a few quick clicks of the rattle before going on its way – busy with its primary task of finding other snakes, or traveling a short distance to the bush it likes to sit under.

So ignore stories from social media and local news outlets that claim this is the case. In fact, throw the entire idea that rattlesnakes are aggressive at all out the window. They are incredibly complex animals with highly-detailed social lives, and busting out of a den to chase after people just isn’t reality.