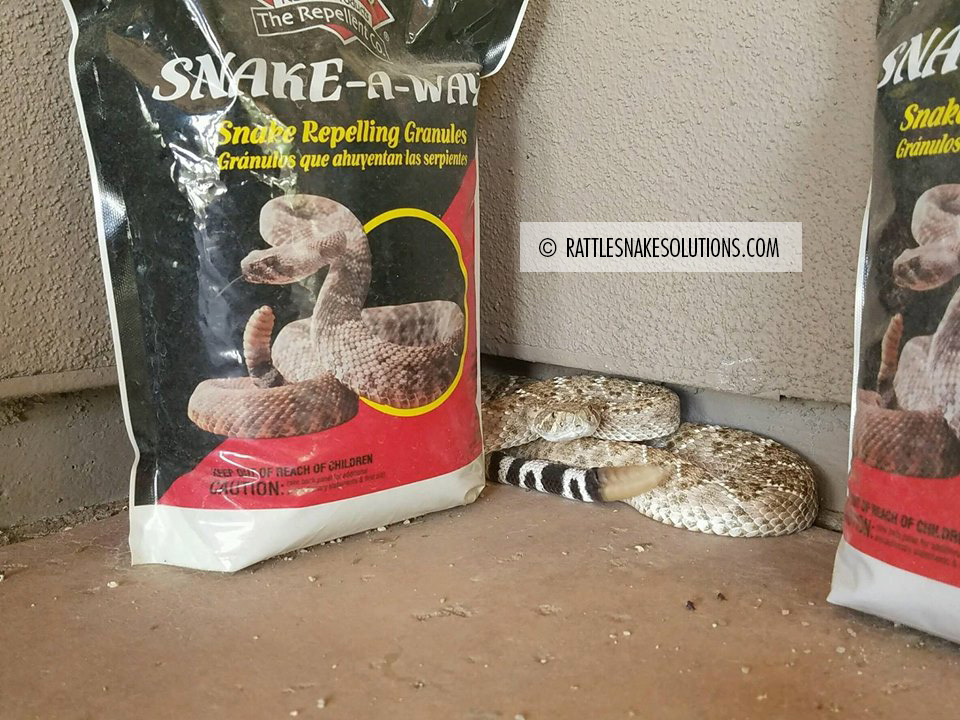 No. From all available data and evidence, snake repellents don’t work at all. Don’t buy them; it’s a waste of money and can be dangerous.

If you’re someone that’s already typing out a “well it worked for me for X years!”, please stop now and read the rest of this before doing so. You may be a victim of shady marketing practices, and you should direct anger towards those that would lie to you to make a buck instead of this article.

Rattlesnake Solutions has many thousands of records of rattlesnakes found in yards all across Arizona. Yet, we have not seen any perceivable difference between yards treated with snake repellent products (any of them) and yards that have not. We literally find rattlesnakes hiding in and under bags of the stuff, sleeping on top of mothballs, and any combination of these scenarios. Every day, we are called to homes with the tell-tale smell of a cat litter box that tells us one thing: this person was tricked into spending money on snake repellents, and the fact that we are there proves it does not work.

What is a snake repellent?

There are a variety of products that market themselves as capable of keeping rattlesnakes out of your yard. Most are just various forms of the chemicals found in mothballs, but there are some herbal varieties as well. There are some that also claim to mimic the smell of Kingsnake musk (Kingsnakes are natural predators of rattlesnakes). There are other forms as well of the more home-grown variety, such as actual mothballs, coffee grounds, rope (not kidding), lyme, and others. There are other forms, like sonic emitters and various electric fire-hazards, but they’re mostly sold in other countries. We won’t go into any specific products here, because none tend to work better than any others. It’s a great way to make money for a the person selling it, but not an effective way to keep snakes out of your yard.

The best measure of the ineffectiveness of snake repellents are the rattlesnakes themselves. If snake repellents worked, we’d not keep finding rattlesnakes in these yards, but we do. The featured image in this post is from a property in 2015 that was completely covered with the stuff. So much, in fact, that the homeowner stored the remaining bags (along with some empties) against the side of the house – inadvertently creating a shaded area. the result? A Western Diamondback Rattlesnake moved in overnight. This un-posed photo was taken by a Rattlesnake Solutions field agent prior to capture and relocation of the snake. Situations that make for such a great photo are rare, but the case of snake-repellent failing to even prevent direct contact with a snake is unfortunately common.

If you think snake repellents work, blame our brains.

If you have used these products and have not seen snakes, it has nothing to do with them. If you’re the type that is actively trying to prevent these situations in your yard, you’re almost certainly doing other things as well that actually do help. Things like: rodent control, good landscaping practice, keeping a clean yard, barriers and physical prevention, etc. If you have experienced this, to the point even where you’ll defend it despite all objective evidence and data, you may be a victim of a logical fallacy called confirmation bias. It’s something we all experience, perhaps some more than others. If a pest control guy has convinced you to give him money for it (or the marketing on the bag at Home Depot, etc), you are invested in having confidence in that decision. There is no such thing as “it works for me” if it doesn’t work for everyone; it works or it doesn’t, and reality is the latter.

Here’s a video that explains how confirmation bias works.

This type of misinformation is dangerous. These products create a false sense of security where none exists, and homeowners, believing their yard to now be immune to snakes, let their guard down and stop the basic safety actions that actually do keep people safe. If it were any other topic but rattlesnakes (the thing people seem to love to not know much about), it would be yanked off the shelves and outlawed.

Another scary and unfortunate fact: when I’ve talked to dealers privately about it, the sentiment seems to be “ya we know it doesn’t work, but customers ask for it”. That level of unethical practice being the norm is frustrating at best. There are of course many pest-control companies that fully believe it to work, so just having it on the list of services doesn’t mean your people are trying to intentionally deceive you … but some do know it doesn’t work but sell it anyway.

What works to keep snakes away?

Keep food, water, and shelter opportunities to a minimum. View your property as habitat to be exploited by local wildlife. The fewer resources exist for animals, the lower the chances are of having a surprise rattlesnake encounter.

A few of the big ones:

A more complete guide can be found in our Guide to Living With Snakes Basics.

Why should we trust you over our snake repellent dealer?

A simple fact: if it worked, we would sell it. If it did work, it would be a great thing for everyone and would be a huge financial benefit to me, personally. But, snake repellents don’t work. Don’t fall for it.

And, if you’re a company that sells it without even considering the facts here: do better for the people that trust you to protect them.