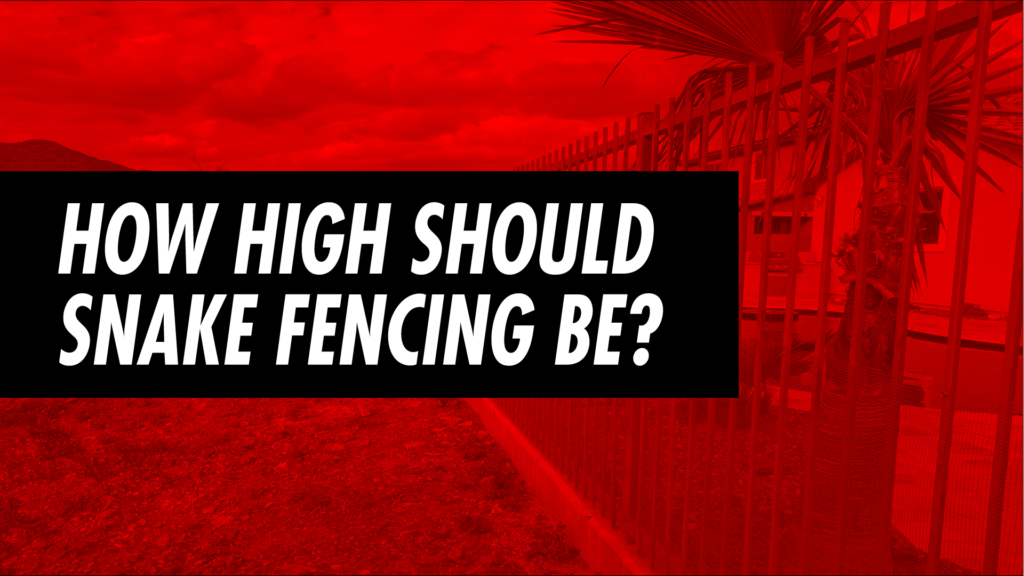 One of the top questions we get about rattlesnake fencing, is HOW HIGH DOES SNAKE FENCING NEED TO BE?

These questions aren’t only from homeowners, but also in regards to regulations from homeowners associations and planned communities who unfortunately often enforce sub-sufficient standards for snake fence installations.

The quick answer: 3’ high. In this post I’m going to show how we got to that answer, and why it’s so important to do it right, that if it’s done wrong, you probably shouldn’t install snake fencing at all.

If you prefer, here’s the video showing how high a snake fence needs to be, including details of our experiments:

A quick recap on this topic: rattlesnake fencing is a physical barrier that is designed and installed in such a way that it prevents rattlesnakes from getting into an area. The exact specifications of how to do this effectively are what our group has developed over the past decade to create the standard this type of work.

That being said, rattlesnakes are thinking, and unpredictable animals, so these standards need to be based on their behavior and their physical capabilities more than anything else.

And a quick disclaimer: this design is intended to exclude rattlesnake species native to the desert southwest, and while it has a level of varying effectiveness on other types of snakes, there is nothing that will exclude all types of snakes in all places all of the time. If someone promises you that, throw that contact in the trash.

So, back on topic: how high does a snake fence need to be. The question really is: how far up a smooth surface from the nearest foothold can a rattlesnake climb?

Rattlesnakes can and do climb many things: trees, bushes, piles of rocks, anything with sufficient texture and grip opportunity can be used to climb. However, smooth surfaces without protrusions are not climbable by rattlesnakes. Concrete or metal walls are impassable to rattlesnakes as long as they’re high enough to keep them from getting their head over the top. That’s why smooth steel mesh of the right gap size is the perfect material to use when installed at the right height.

From testing and observations, we notice a couple of things about how rattlesnakes attempt to climb smooth surfaces:

First, the structure of their body prohibits them from climbing straight up more than about 1/3 of their body length, unless additional support is offered.

Second, if there is stabilizing support, like a tight corner or a rock to push against, they can climb higher, to about half of their body length.

That means that we need a fence that is as long as half of the body length of the largest rattlesnake in any given area, with some additional buffer to eliminate any variability in height or extraordinarily rare and large individuals.

That means to exclude a 4’ rattlesnake, which is a very large adult, you’d want a minimum height of 30” – or half the length of the snake with an appropriate buffer of 6”.

To exclude a 5’ rattlesnake, which would be an exceptionally rare monster-sized snake in the desert southwest, you’d want 36” – or, again, half the snake length with a 6” buffer.

In almost all cases, 30” high will be just fine, and we have certainly installed quite a few fences where this is appropriate in Phoenix. However, as a regional standard, 36” is our recommendation as of 2020.

In the desert southwest, the largest rattlesnake you will see is a Western Diamondback in the 5’ range. Most are much smaller – around Phoenix and Tucson, where we work, a 4’ rattlesnake is a very big snake, but most top out around 3’. These sizes are based not only our thousands of documented captures and survey work, but all available published data, peer-reviewed literature, and basically anyone that measures them rather than eyeballing it. If you live in parts of Texas or the Southeast where rattlesnakes can get into the 6’ range, just use the same formula stated above and you’ll be covered.

To test all of this, we conducted some simple experiments.

First, we constructed a box with an adjustable floor to create varying heights of mesh to test. The box has two settings: The 24” height that is required by many HOAs, and the 36” height as per our standard. There is black duct tape along the top and sides to remove any sharp edges that could possibly injure the snakes, or deter them if they get up that high.

We put a wifi security camera on it and left the room. The quality is pretty bad, but for recording 24-hour video for days at a time, this is what we had available, and is more than enough to see what happens.

Next, we need some snakes.

The first snake is a huge snake from out of state that’s the largest diamondback we could get our hands on, and represents the largest possible rattlesnake you could encounter in Arizona … measuring at exactly 5’ long, nose to tail, excluding the rattle.

First, he went into the 24” box. It took him a little bit to figure out which direction to go, but when he did, he easily climbed out of the 24” height mesh. We repeated this several times and with each instance, he escaped more quickly than the last time. It’s clear that 24” tall fence will not keep a 5’ rattlesnake out of a yard.

Next, we tried the 36” height. The snake stayed in the box for a period of 5 days, moving often and trying to climb up and out at the corners as had previously worked so well with the 24” high fence, but was unable to escape. Eventually, it curled up in a corner and stopped trying, at which time we ended the test. From this, we can see a 36” tall fence can repel a rattlesnake up to 5’ long.

Next, we repeated the experiment with a more typically-sized rattlesnake that homeowners could encounter, at 4’ long.

It took her quite a bit longer, but she was eventually able to just get her nose over the top and pull herself up and over. Had the mesh been another 6” higher, this 4’ rattlesnake would not have been able to climb over.

When tested in the 36” box, she stopped trying quickly and spent most of the 5 day period of the test sleeping in the corner.

As expected, a 36” height effectively repels a 4’ snake as it did the much larger 5’ snake, unholding the standard and underlying mechanics that we explained previously..

So the conclusion? 36″ is the correct height for snake fencing.

The 24” height that is so often required by HOAs and installed by do-it-yourselfers and pest control guys is not sufficient to protect your yard from rattlesnakes. To do the job effectively, you want a minimum of 30”, with a standard, recommended height of 36”.

Very importantly: a rattlesnake fence that lets some rattlesnakes in, is more or less an effective rattlesnake trap. In situations where a property can’t be protected correctly, either using the right materials or correct standard, it’s probably best to just do nothing at all and allow snakes that may find themselves in the yard to be able to leave. In many cases, the reasons why someone is not able to install a fence to the correct standards lie in the HOA regulations of the community.

It’s not at all that HOAs don’t care about their residents’ safety; quite the opposite in-fact, it’s just that exactly how high these snake fences should be isn’t really written down anywhere, or available as more than rough opinion, so decisions are often made that reflect aesthetic preferences over functional ones. But, in our experience, most communities are more than happy to adapt regulations based on solid reason, which is what we are providing here.

And to wrap it up: a few closing notes on the subject of fence-climbing rattlesnake that are important but don’t quite fit into the height question:

And lastly, keep in mind that everything discussed is for rattlesnakes specifically. There are some very good climbers, like Gophersnakes, Coachwhips, and kingsnakes, that can do fun things like climb straight up rough stucco walls – so seeing one of these snakes in a rattlesnake-fence protected area is not an indicator that the fence has failed in some way. I realize that many people choose to install rattlesnake fencing with the intention of not seeing any snake at all, because let’s face it, most people don’t like snakes, but we want to draw a big distinction between snakes that might look scary, and snakes that pose an actual danger to people and pets.

That’s it for now, be sure to take a look at our other snake-fence videos. In particular, the one that addresses mesh-size and baby rattlesnakes. And as always, if you have questions about rattlesnake fencing, leave them in the comments and get you the best answer we can. If we get enough of a similar question, we’ll work on another video just like this one. Be sure to get on our Facebook page for a lot more information as it happens.