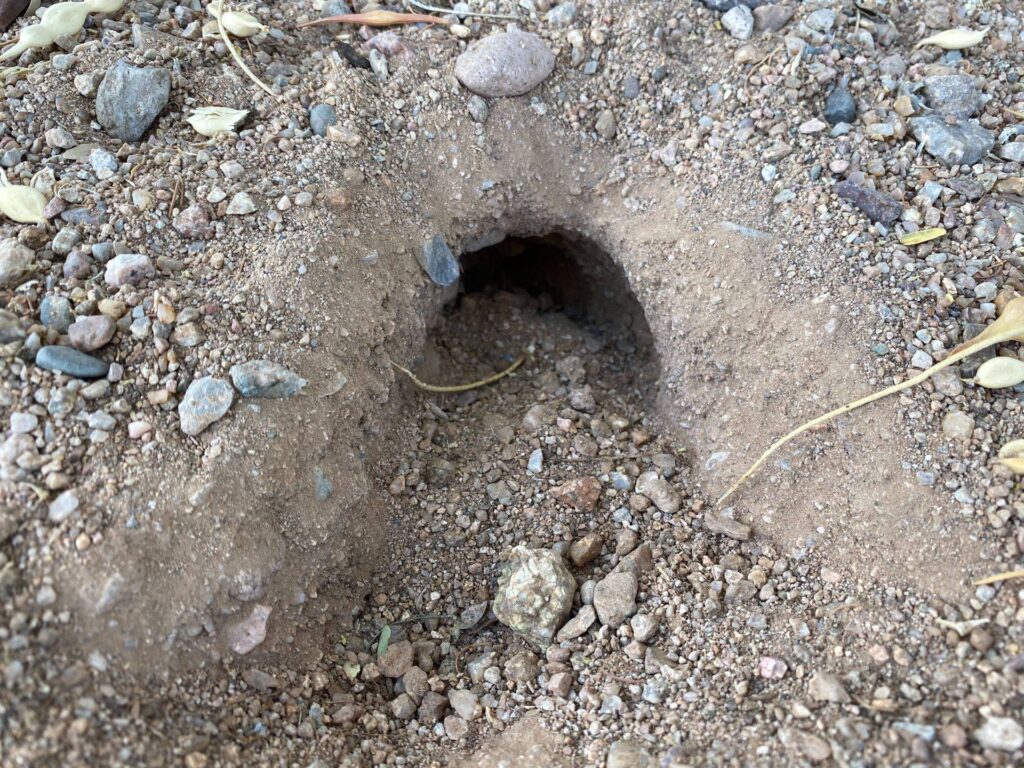 This question is one we hear often when we arrive at a homeowner’s residence to relocate a snake or perform an inspection. From the homeowner’s perspective, they’re likely a bit befuddled and nervous, because who wants a snake taking up residence where the kids play or where the dog likes to run around, right? Well, it’s a good question, and one I’ll answer as we explore a little bit about snakes, their behavior and where you’re likely to encounter them.

If you’ve lived in the Sonoran desert long enough, it’s likely you’ve seen many holes at the base of bushes, in the sides of wash walls, under rocks, etc. There is a lot of wildlife here, and many species have adapted to escaping the brutal temperatures of an Arizona summer day by getting out of the sun and down a hole. The hole is a refuge whereby the animal can keep hydrated (the humidity underground is appreciably higher than on the surface) and stay cool (the temperatures are appreciably cooler too).

In the greater Phoenix/Tucson areas, we don’t have snakes that dig their own holes In some areas of the country there are a few species that will (for example, in the eastern US female hognose snakes will excavate a hole to lay their eggs in). Here in Phoenix/Tucson, holes are dug by rodents, tortoises, lizards, etc. but not snakes. That said, snakes will sometimes use holes dug by other animals for refuge.

When you’re looking at a hole in your yard, how can you tell if a snake has been using it to get out of the sun/heat? Well, there are some indicators. First, rattlesnakes like to bask outside their refuges quite a bit. Depending on the substrate (ie sand, dirt, etc.) that the hole has been dug in, rattlesnakes will leave telling imprints in the substrate as evidence of their presence (similar to the footprint you leave while walking in sand). The imprint often looks like a “disk” of flattened dirt or sand, and in very clear cases you can even make out the belly scales of the snake that rested there outside the hole.

How can you tell if a rattlesnake is using the hole?

Snakes will also leave imprints as they enter/exit a hole. This looks like a flattened strip of sand/dirt that’s “raised” on the edges These edges are raised because as the snake crawls into/out of the hole, dirt and sand are pushed aside. Even in areas where the substrate isn’t conducive to leaving these particular kinds of imprints (ie gravel), it’s still possible to find evidence of snake activity. If there is grass or vegetation surrounding a hole, a snake will “flatten it out” as it rests outside the hole. Depending on the composition of the gravel, you may also see imprints as well.

Now, snakes aren’t the only animals that will leave evidence of their comings and goings into and out of holes. Lizards will often leave tail drags (they look like a line in the sand/dirt with little divots on the sides (the lizard’s hind feet)). Snake tracks are usually much wider and flatter than lizard tracks, and with a little practice it’s easy to tell them apart. Tortoises will leave very wide “slide” marks as they enter/exit, and these are easily differentiated from a snake track. Rodents will leave footprints too, but again, these look nothing like snake tracks.

How do you keep snakes from using these holes?

If you’ve seen rodent activity at a hole in your yard, it’s possible that at some point a snake may decide to use that hole as refuge. This is the best possible scenario for the snake, as it gets the cooler/more humid benefits out of the sun and may get a free meal to boot! If you see evidence of rodent activity in your yard (one big indicator is holes popping up where they didn’t exist before), your best bet is to contact a professional to address the rodent issue.

You can destroy the holes you see, but rodents also have a habit of making new ones when their old ones are destroyed. Once the rodent issue is addressed, that will also address the possible snake issue because at that point once the old holes are destroyed there won’t be any rodents to make new ones.

Is there evidence that a snake has been using the hole (see above)? If not, the answer is likely no. If you do see evidence of snake activity, it’s important to remain calm and contact Rattlesnake Solutions to address the snake issue and a professional rodent expert to address the rodents.

Rattlesnake Solutions will professionally examine any holes, make a determination as to snake activity and also inspect your entire yard for further evidence of snake activity. They’ll discuss their findings with you and answer any questions you may have about snakes, holes, living in the desert, and more.

Ultimately, these holes, even though they aren’t caused by snakes, may be an indicator that your yard has things that snakes like. That means that if you’re in a contact zone with native desert, a visit from a rattlesnake or two is a strong possibility. This would be a good “shot across the bow” moment to take action to make your yard less attractive to rattlesnakes, and take care of things like having rattlesnake fencing installed.